It’s been nearly 40 years since the last polo pony dashed across the green field during a match at the Farmington Polo Grounds. On August 13th nearly 40 ponies returned to play on the historic grounds which includes 60 acres of beautiful land adjacent to the Farmington River. And why did the ponies come back? The newly formed Farmington Polo Club International Equestrian Center hosted its inaugural Dream Ride Polo Exhibition. The match benefitted the Hometown Foundation, a charity about inclusion by helping and unifying those less fortunate, in need, or physically and intellectually disabled. The Dream Ride Experience, held on the polo grounds each August, encompasses the entire mission of the foundation. The Dream Ride Experience is an annual fund raiser for the Special Olympics as it celebrates the special achievements of Special Olympians.

Players get ready for their first chukker

During half-time the traditional “divot stomp” took place. Spectators came out on the field to replace the divots made by thundering horses’ hooves during the first half. This activity promotes safety for horses and players as well as socialization, not to mention fashion show-offs, for friends and family. My husband Ray and I went out there and stomped as many divots as we could find. There were many women dressed in lovely sundresses and fashionable hats that could have made the rounds at the Saratoga Race Course or even the Kentucky Derby. 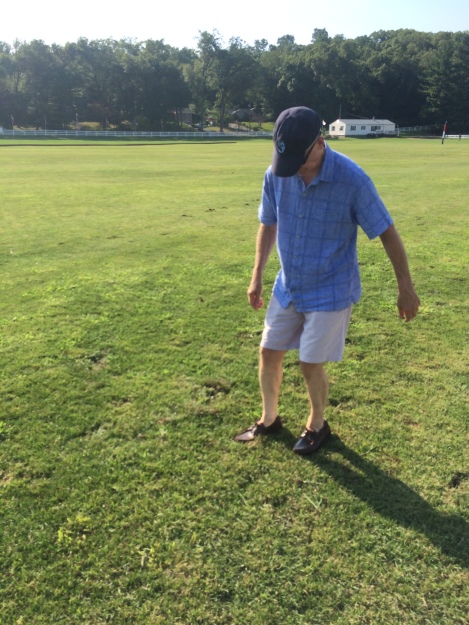 Spectators also competed for the Best Tailgate Award based on the creativity, dedication, and decoration of the tailgate set up. (Full disclosure: Our Veuve Cliquot champagne inspired tailgate won the award). Following polo match play, we all enjoyed a Brazilian BBQ, in honor of the Rio Olympics and the international culture of the sport of polo.

Ray enjoying the tailgate at the Farmington Polo Grounds!

Farmington Polo Club Manager and Polo Instructor Jennifer Williams recently told me the club is, “Thrilled to bring polo back to the Farmington community after 40 years. We are continually upgrading the polo club grounds to make this a world-class venue for players, ponies and the public to enjoy the fun-filled, action-packed sport of polo.”

The History of Polo

According to the Museum of Polo and Hall of Fame (polomuseum.com) located in Florida, polo is arguably the oldest sport known to man. Its origins in Central Asia date back to around 600 B.C. to 100 A.D. where mounted nomads trained for sport and war on horseback as they migrated to Persia, recognized as the birthplace of polo. Modern polo began in India in 1859 between British military officers and locals on tea plantations. By 1876, New York Herald publisher James Gordon Bennet brought polo to the United States after a visit to England where the game was thriving. 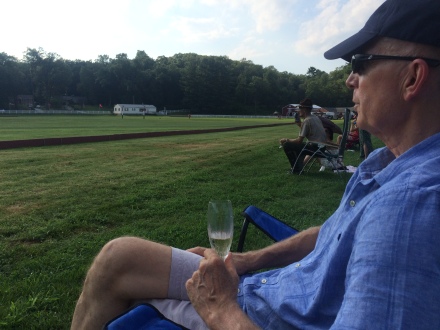 Ray sitting field side with a classic polo spectator beverage

The Westchester Polo Club was the first organized club in the country in 1876. By the 1920’s polo was at its peak of popularity. The Farmington Polo Club was formed in 1929. During the 1920s and 1930s the Meadow Brook Club in Westbury, NY on Long Island was the center of the polo universe. Browsing through The New York Times archive online, one sees just how popular the sport was. Many times Meadow Brook and Farmington played each other. At the 1930 U.S. Open polo match there were 45,000 spectators who came out to support the sport. Can you imagine?

The sport even made it to the Olympics from 1900 to 1936. The last Olympic game played at the Berlin Summer Games in Germany gave the gold medal to Argentina who defeated Great Britain. Mexico captured the bronze.  Today, polo is thriving once again with the United States Polo Association recognizing 275 member clubs with 4,500 players.