On a recent trip to Sagamore Hill in Oyster Bay, Long Island, New York, I went looking for a piece of my family history. In the process I discovered the depth of pet ownership of President Theodore Roosevelt at his family home. 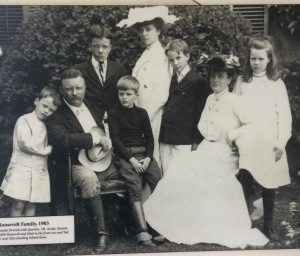 Teddy Roosevelt’s family ~ Jack belonged to Kermit, fourth from the left in the front row, standing next to his seated mother Edith

The 26th first family had a plethora of pets, including notable dogs like Rollo the Saint Bernard, Sailor Boy the Chesapeake Bay Retriever, Pete, the bull terrier, his son Archie’s favorite pet, Skip the Rat Terrier, and most importantly, Blackjack or “Jack” the Manchester Terrier, the favorite dog of his son Kermit Roosevelt. All these called Sagamore Hill as well as the White House home.

The original ‘Jack’ the Manchester Terrier sits in a chair at Sagamore Hill, circa 1904

While at Sagamore Hill to retrace my grandfather’s brush with history, I imagined the six Roosevelt children running around the 3-acre garden with ponies and puppies.

As a chauffeur for a Rockefeller in-law in 1925, my grandfather happened to be driving alone along Cove Neck Road in a rain storm and came upon a well-dressed woman scurrying home. He offered her a ride and drove the former first lady to the front door of Sagamore Hill. As I walked the route of my grandfather’s good deed, I took in the landscape of the 155-acre working farm and discovered the family’s pet cemetery near the stately home.

The Roosevelt’s menagerie, some would say zoo, occupied the home from 1885 through the children’s grown up years, past 1919, the year of the President’s death at age 60 and until Edith Roosevelt’s death in 1948. The stable and lodge that housed the horses was built around 1884 before the farm when into production. Horses were used to pull plows around the estate and carriage horses, like General and Judge, took them through the villages of Long Island around the turn of the 20th Century. Roosevelt was known for his jumping and polo playing skills and Bleisten was his favorite horse.  Shetland ponies, like the famous pinto named Algonquin, taught the children to ride.

Beyond the family pets, the children treated many of the farm animals as their pets too. The cows, horses, and chickens joined the dogs, cats, guineas pigs, rabbits, a badger, kangaroo rats, snakes, bear cub, lizard and others. You can see the full list at presidentpetsmuseum.com

Several letters date 1902 from Roosevelt’s years in the White House, reveal the depth of the family’s affection for animals. Teddy writes to a Mrs. Field of Chicago that he had, “such pleasure to send you a photo of my boy Kermit with Jack, the Manchester Terrier, who is absolutely a member of the family.” Later in the year, President Roosevelt is complaining to another family friend that he could not possibly take another Collie puppy as a gift to the household because, “we already have three collies, one of them a puppy, and four other dogs in addition, and that I really have not house space or stable room for any more.”

They valued pets as family members and each got a formal funeral ceremony and burial. Kermit’s pet Jack was most beloved by the whole family. So much so that he was buried twice. First at the White house, where he was the nation’s first pet. He was laid to rest under one of the rose bushes in the famed garden. But then Mrs. Roosevelt, the same fine lady my grandfather “drove” insisted that he come home to be buried at Sagamore Hill. After Roosevelt was no longer President, she could not bear the thought of Jack being so far away under the gaze of politicians who cared nothing for the beloved black breed and her Jack in particular.

On an exhibit at Sagamore Hill Teddy is quoted in his autobiography as saying, “As for the dogs, of course there were many, and during their lives they were intimate and valued family friends, and their deaths were household tragedies.” Photos of Jack adorn the exhibit, but so does the actual stone monument that marks his grave in the pet cemetery. It reads, “Faithful Friends, 1902, Susan and Jessie, Little Boz. 1903 Jack.

Jack’s gravestone as it appeared more than a century ago

Jack’s grave as it appears today at Sagamore Hill

Today, Sagamore Hill is open to dogs to walk the remaining 83 acres of Teddy’s pet paradise. Of course, now visitors must abide by the National Parks Service regulations which are noted in Section 2.15 of the Code of Federal Regulations that states that pets must be “restrained on a leash which shall not exceed six feet in length, or otherwise physically confine a pet at all times.” So, while still pet friendly, it’s not quite the same as a century before when animals roamed free across the summer white house lawn. 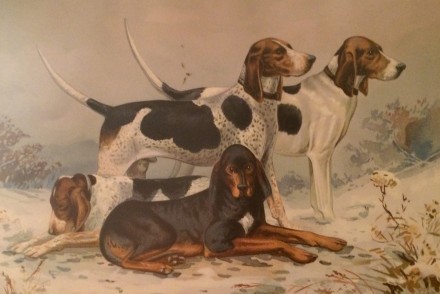 While binge-watching Ken Burn’s historic PBS series The Roosevelts last week, a photo of Theodore Roosevelt and his hunting dogs triggered a thought; there is a meeting room in my office called the Roosevelt Room. I knew the collection of sporting dog prints and detailed pedigrees that graced the walls had something to do with “Teddy” but after a decade of sitting through countless meetings starring at these prints, their origins had been lost on me. So I took a recent lunch break to revisit the treasures of the Roosevelt Room at the American Kennel Club headquarters in Manhattan.

As you turn on the light switch, you are greeted by the black ink on grey paper cover art for the collection “Celebrated Dogs of America, Imported and Native, by A. Pope Jr., published by S.E. Cassino, Boston.” Beneath the poster a framed handwritten note card from Mrs. Richard Derby of Oyster Bay, New York, dated May 1974, reads, “These prints of Celebrated Dogs of America were collected by my father Theodore Roosevelt when he was a student at Harvard in 1879.”

As part of 19th century gentlemen’s society, Teddy must have not only studied, but hunted with these sporting purebred dogs. Today, the 18 muted chromolithographs of original watercolors painted by wildlife painter Alexander Pope, Jr. (1849-1924) hang in a neat row, midway up the walls, circling the room, except where their flow is interrupted by an HDTV used for video conferencing.

Who made the cut in 1879? Celebrants included a pack of black and white fox terriers named Rattler, Vixen, Tyrant, Minnie, Nettle and Daisy; the Rose Tree Fox Hunting Club of Philadelphia foxhounds, and several champion pointers including Dan, a native whelp born 1876 and owned by Mr. John G. Heckscher of New York City. Under Dan’s striking pose it reads, “Dan’s performance in the field have won him a high private reputation, and it is claimed by his friends that as a retriever he has no superior in this country. His first performance at a bench show was in Springfield in 1876, when he secured first in the puppy class, and the following year received ‘very highly commended’ at the New York bench show.”

Trimbush, a Clumber Spaniel, whelped May 1875, had quite the pedigree. “Trimbush was bred by Mr. William Brailsford, head keeper to the Duke of Westminster, and was imported by Mr. Jonathan Tomas, jr., of New York. He is a perfect specimen of the breed and his superior could not be found in England at the time he was brought to this country.” Trimbush’s mother was Earl Spencer’s Sall, out of Earl Spencer’s Meg and Marquis of Exeter’s Beau, Beau’s sire being the Duke of Newcastle’s Rover.

It seems that big fancy names were not the rage back then. Take for example others in the collection, champion Red Irish Setters Elcho & Rose, Don the smooth-coated St. Bernard, Mike, the imported Irish Water Spaniel, Lofty the Llewellyn Setter Dog, Jack, the English Mastiff, and the white Bull Terriers, Spider, Grabb and Nellie, whose likenesses silhouetted against farm fencing made a pretty picture.

Some dogs had famous owners, like a pair of greyhounds named Tippecanoe and Prairie Girl. “Tippecanoe was a white dog formerly the property of General Custer and is a grandson of a great dog named Master McGrath.” Under the print a letter dated April 12, 1879, three years after Little Big Horn, from Mrs. Custer reads, “ Sir, I regret to say the pedigree of the imported hound General Custer received from Scotland has been mislaid among the papers in our home in Monroe, Mich. The pedigree of the dogs sent him from Canada we never had. I do not know whether the dog you own is from the Scotch or Canadian dog. We often had fifty in the pack of hunting hounds. I thank you for your kindness to the dog, and I am glad he has a good home. Very respectfully, Elizabeth M. Custer.”

Rattler and Belle, two Beagles, owned by J.M. Dodge of Detroit came with this explanation. “Foot beagles should not much exceed nine inches in height; they are now even used up to eleven and twelve inches, going a pace which requires a good runner, in prime condition, to keep up with them.” Did Teddy ever had to keep up with these quick Beagles as they chased hares across the countryside.

Bevis the Irish Wolf-Dog is my personal favorite. “Bevis is believed to be the only specimen of his breed in this country. He was bred in Ireland by a gentleman who has given a great deal of attention to bringing the breed back to its former excellence. (it being now nearly extinct). The dog was brought to America and shown at Westminster Kennel Club in 1879.” His description goes on to state “…The wild animals which he seemed powerful enough to conquer having long disappeared from the kingdom. The beauty of his appearance and the antiquity of his race are his only claims as he disdains the chase of stag, fox or hare.”

I wonder which dog was Teddy’s favorite? If you’d like to view the collection, drop me a line, it’s open for public viewing by appointment.