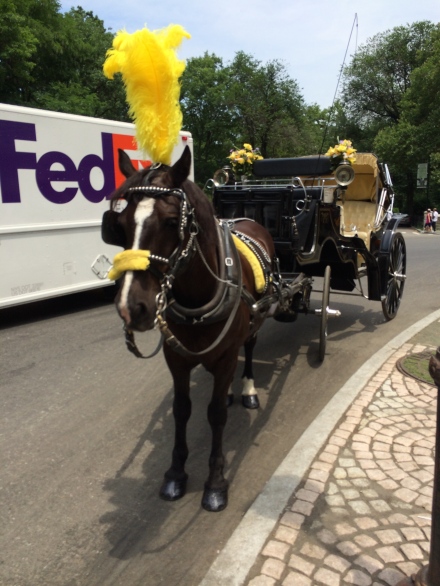 With the Westminster Kennel Club Dog Show right around the corner, it’s time to share a column I recently wrote about the Carriage Horses of New York City. If you are coming to the city for the big dog show, stop by the stables to meet the horses, take a tour and go for a carriage ride. Go to Facebook for Canines and Coaches 2015 open house event info: https://www.facebook.com/caninesandcoachesNYC2015

Grooming Tyson before he heads out for a carriage ride

Last summer I was invited by a fellow dog breeder to go on a tour of the carriage horse stables on 52nd Street in New York City. I was vaguely aware that New York City’s Mayor Bill DeBlasio had made a campaign pledge to remove the horse carriage industry from Manhattan and replace them with electric car rides in Central Park. As a horse lover, I found this political promise odd and even dangerous. Animal rights extremists were alleging that the carriage horses were not be treated humanely and that they needed to be “rescued” from this dangerous life on the city streets. I was curious, so I accepted the invitation and went to tour the stables.

What I found amazed me! As I toured the three-story stables, I was impressed with with rubber matted ramps connecting the floors in a barn any horseman would be proud of. It was summer and there was neither a foul odor from the box stalls nor a fly that I could find. What I did find where well cared for, well-groomed, well-fed, content horses munching on good quality hay, drinking clean water, and taking carrots from my hand. One of the drivers, Steve Malone, a second-generation horseman, offered us a carriage ride through Central Park. We climbed aboard the open-air carriage and enjoyed the views, the clip clop of the hooves on the roads, and the slowing down of a hectic day to enjoy the nature of the park. It was a touch point with horses and history. 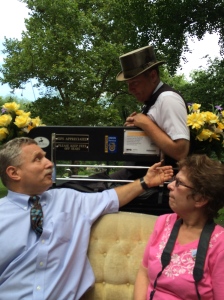 Because I had taken the time to visit with the horses, experience a carriage ride, ask questions of the owners on all matters of care, conditioning and retirement, I was soundly convinced that these horses, who have a job and do it well, don’t need to be rescued from the city streets. In fact, this industry is highly regulated since the 1850s with oversight by five city agencies and a 144 pages of regulations. Horses cannot work if it’s too hot, the can not work if its too cold, they get mandatory vet visits several times a year and five weeks of vacation away form the city. They even have a retirement home called Blue Star Equiculture.

This past weekend, I was fortunate enough to attend a conference in support of animal welfare where one of the licensed drivers from New York, Christina Hansen, spoke on the topic of the threat to ban the horses. It appears to me that there is a hidden agenda behind this issue. I won’t taint your objectivity about it but it involves real estate developers and animal rights groups electing a political candidate. It also involves a community’s response in the face of attacks. In addition this issue has created a rare occurrence in New York City media, where The New York Times, the New York Daily News and the New York Post, all come out in favor of the carriage horses in their editorials. I urge people who want to learn more about this topic, this hidden agenda, and how to support saving this important tradition of horses in our everyday lives to visit www.savenychorsecarriages.com. Please watch the video, narrated by Liam Neeson, a strong advocate to preserve this historic tradition in the city. Also, stop by the blog posts of author Jon Katz at www.bedlamfarm.com for yet more insight about our humanity and our horses.

Stall with a view!

The industry has several opportunities each year for open houses and tours of the stables. They believe in being transparent and are proud to show off the care their give their horses. Last June they held their annual ClipClopNYC open house –  www.clipclopnyc.com – and in February they held the first annual Canine and Coaches open house in conjunction with the venerable Westminster Kennel Club dog show. The carriage drivers offered discounted rides for any exhibitor and their dog who had been to Westminster. It’s nice to see that when the going gets tough, the dog and horse people always pull together. Next year, Canines and Coaches will be happening again. For more information visit http://www.facebook.com/caninesandcoachesNYC2015.

The movement to ban the carriage horses is not over and it’s an issue still before the New York City Council, despite a recent poll showing that New Yorkers are 2-to-1 in favor of keeping the carriage horses in Central Park. If you are a horse lover and want to support keeping this tradition alive, please, follow “The Famous Horse-Drawn Carriages of Central Park” on Facebook and @NYChorses on Twitter. Use their hashtag, #SaveNYCHorseCarriages to stay informed and help however you can.