After bagpipe music filled the cavernous terminal, everyone fell silent when the Phantom of the Opera’s Marcus Lovett sang the National Anthem. A moment of national pride. 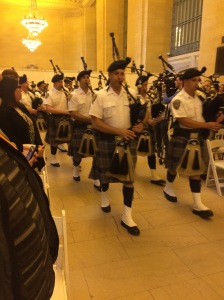 Marcus Lovett, left, during rehearsal. He sang the National Anthem after the presenting of colors and America The Beautiful during the recessional

Among the 19 law enforcement canine graduates, there were 15 MTA police dogs and two from the Putnam County Sheriff’s Office. There were German Shepherds, Belgian Malinois, several that were a mix of those two breeds, and two adorable yellow labs, hailing from the United States Park Police. The proud canine handlers and their partners walked forward, one-by-one, executed a sit, and received their new badges dangling from a collar hung around their necks.

Graduates received either the 12-week explosive detection training and / or the 16-week anti-terrorism training at the MTA’s 72-acre training facility in Stormville, NY. During the ceremony the canine unit’s executive officer Lt. John Kerwick, explained how these dogs are a valuable tool with, “four legs, a brain, keen instincts, good eyesight and a nose that is 3000 times stronger than humans. They can interrupt a threat to keep MTA customers and employees safe.” One dog can scan an unattended package in minutes versus calling in the bomb squad. The MTA Police Canine Unit, founded in 2002, is one of the largest explosives detection units in the country. They have approximately 50 dogs, which last year responded to 25,860 requests for service and inspected and cleared 2,584 unattended packages. 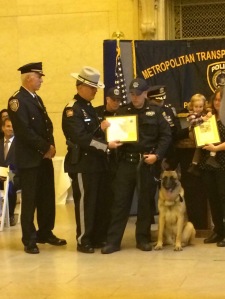 Each handler received a diploma, each canine received a badge, and each family of the dog’s namesake received a plaque. Then all posed for a group photo to commemorate graduation

And while these police canines are first responders to a dangerous threat, they also carry a tribute each time their handler calls their name. Each of them is named for a fallen hero or dedicated officer. As each graduate received his badge, the family members of the canine’s namesake were invited to come to the podium to share a moment of sacrifice and service that the dog’s name will carry on. Each family received a commemorative plaque with the dog’s photo, name and a description of the officer’s sacrifice and service. Three of the graduates live in Connecticut and these are their stories.

K-9 George and MTA Police Officer Allan Fong from Fairfield. George was named in honor of Police Officer George Wong of the NYPD, who died on May 24, 2011, from illnesses he contracted after inhaling toxic materials as he participated in the rescue and recovery efforts at the World Trade Center site following the terrorist attacks on September 11, 2001. Fong said he wanted to name his dog after Wong, who helped him as a young NYPD officer.  He and George have been through months of training in tracking, article recovery, subject searching, wide field search, and handler protection. The 91-pound German Shepherd/Malinois mixed-breed is Fong’s first police dog.

“He has a very good temperament, is great at home, loves coming to work, loves being in the back of the truck,” Fong said. “He can’t get enough of coming to work!” And while his main purpose is to patrol MTA properties, he also assists other agencies in need of assistance, such as tracking down lost children. Each dog and handler develop a deep bond working so many hours together. “I’m with him like almost 24/7,” Fong said. “I spend more time with George than I do with my wife or kids.”

K-9 Johnny and MTA Police Officer Kevin Pimpinelli of Naugatuck. Johnny is named in honor of Sergeant John Mullen of the MTA Police Department, who suffered a fatal heart attack while on duty on January 26, 2007. Mullen was Pimpinelli’s supervisor for many years. In fact, Pimpinelli’s first dog, Mullen was also named for the late MTA sergeant. There were 12 Mullen family members in attendance at Johnny’s graduation.

K-9 Johnny as he appears on his own trading card. Each of the MTA Police Canines have cards that handlers can share with children. On the back of the card Johnny says, “If you see something, say something.”

K-9 Johnny had a blast at the graduation. “He’s a social dog, loves people petting him, little kids walk right up to him and even loves getting a belly rub,” Pimpinelli said. The two-year-old purebred German Shepherd was born in the Netherlands. He is fully trained for explosives detection and certified in NY and CT. K-9 Johnny can detect about 15 different explosive odors. “Once he finds one, he’ll sit and stare right at that item. Then I have to interpret what he is doing.” Pimpinelli explained. It’s this communication between dog and handler that creates a great team.

Pimpinelli said that his first dog Mullen is retired and lives as his home. He joked that Johnny and Mullen both vie for his attention. “They both sleep in the bedroom, one is on one side of the bed and one is on the other side of the bed. Sometimes, they both try to be on just one side.”

K-9 Vinny and MTA Sgt. William Finucane of Guildford. Vinny is named in honor of Sgt. Vincent J. Oliva of the Port Authority Police Department, who died on November 27, 2013, after a battle with cancer. Sergeant Oliva led the Port Authority Police Department’s Canine Unit. Today, Sgt. Finucane, is the head trainer for the MTA police canine unit. It was him and three assistant trainers — police officers John Brazil, Nelson Hernandez, and Allen Kirsch — that trained the 2015 graduating class.

K-9 Vinny, is Finucane’s fifth dog, and came to him serendipitously. “He wasn’t a planned dog. Vinny was going to replace another dog that was having problems, but he made it. So now I have a dog with no handler,” Finucane recalled. His dog was 12 years old and ready to retire, so Vinny became his.

Thanks to Lt. John Kerwick for inviting me to this very special occasion!

Lt. John Kerwick, his recent graduate K-9 Seabee, a German Shepherd, and me.

Every five years all of us in the dog fancy don fashionable hats and period outfits to celebrate a commemorative version of an iconic dog show. Since its reincarnation in 2000 by a group of dedicated fanciers, the Morris and Essex Kennel Club dog show has become a modern classic with a serious nod to its traditional roots.

Donning my fashionable M&E hat and outfit in the grooming area.

M&E sprouted in 1927 when Mrs. Geraldine Rockefeller Dodge, niece to the oil baron, sprayed large white tents across her polo field to host thousands of show dogs. The scene at her “Giralda Farms” estate became the annual setting of her signature kennel club in Madison, New Jersey. She personally financed the show for decades. It became a valuable place to come study the best dogs while appearing on the social scene. Mrs. Dodge made it special by offering sterling silver trophies, lavish flower decorations, catered meals for VIPs and the famed boxed lunch for all exhibitors. Only the war years silenced the great show which ended its run in 1957.

If you want to know more about the original M&E, a new book, The Golden Age of Dog Shows: Morris & Essex Kennel Club, 1927-1957, with a forward by William Secord, famed canine fine art historian and gallery owner, promises not to disappoint dog show historians.

Last week M&E’s 2015 edition did not disappoint. A record-breaking 4,666 show dogs made it the largest, outdoor one-day dog show in American History, something Mrs. Dodge would have been proud of. For the previous two shows, in 2005 and 2010, my employment dictated I remain a spectator. But this year, unencumbered, I became an exhibitor for the first time. My kennel of three Norwegian Elkhounds would be among the thousands.

Showing Adele in the 12-18 month puppy sweepstakes class. She went on to win the 12-18 months regular class. Her litter sister Marnie (seen at the end of the line) took Winners Bitch for a 5-point major as part of the GSNEC specialty held at M&E.

Because this is a special show, I decided it would be a fitting tribute, rather a retirement of sorts, to bring my 12-year-old veteran bitch Jinx, officially known as Ch. Elvemel For Your Eyes Only, CGC, to her final show. Her show career ended a decade earlier due to my AKC employment restrictions. The day she earned her championship I was barred from showing her. I remember how I cried winning that major at Bucks County Kennel Club on a blustery May morning in 2005.

Jinx becomes a Ch. Elvemel For Your Eyes Only at Bucks County KC dog show in 2005.

She is the culmination of 20 years of careful breeding, one of the best bitches I’d ever produced. She’s showy with no off switch, a handler’s dream. A direct line back to my foundation bitch, I never got to show her as a special. As an owner/breeder/handler, giving up showing and breeding my dogs to work at AKC to promote showing and breeding dogs was a bittersweet burden.

My dogs know when its time to go to a show. The cues are everywhere: baths, grooming, packing the van and cooking the liver. The morning of, they see us scurrying around the house gathering last minute items, leashes in hand. They are smart, they have memories of fun and excitement. Jinx was especially animated last Thursday. I could hear her brain, “Dog Show! Dog Show!” She knew, after all those years, where she was going. We left at 4 am since we heard the lines to get to the rings might be long. We arrived at 6 am and unloaded ringside in the dark, under one of those large white tents, now sprayed across Colonial Park in Somerset, NJ.

After walking the dogs around the well-appointed grounds, past trophy displays, floral arrangements, and fashionably dressed folks, I gingerly placed Jinx on the grooming table. Bark! Bark! Bark! Bark! Jinx announced. Some things never change. After primping the old bitch, show lead on her, we headed to the ring. As the steward called our number, we proudly walked in. Our heads held high, her’s looking for treats, mine trying to keep my fancy hat on my head in a blowing wind.

Jinx at age 12, shows like a charm at M&E in the Veteran Sweepstakes under Judge Sue Ratz. Her son, Ch. Elvemel Casino Royale CGC, captured Veteran Sweeps Best of Opposite, making us very proud!

It’s customary at shows, when veterans (dogs over 7 years old) are gaited around the ring, to give them a round of applause. Most veterans are returning ‘show veterans’ with long careers. For Jinx, she was here because she belonged here as the fruits of my labor as a breeder. She was here so others could study dogs, could study her. As the judge went over her aging body, she sparkled. Those beautiful dark brown eyes still captured hearts. As we gaited around the ring for that final time, applause as Jinx pulled the lead between us taught, I felt those tears well up again. This time, it was pride, not sadness. The owner of her sire was watching ringside. She commented how watching Jinx was like watching Jag move gracefully around the ring. As a stud dog, he had stamped his quality on her. As a breeder, I had recognized that and matched it well with Jinx’s dam. It was good to know that after decades of studying dogs, as a breeder, I finally got it right in a beautiful bitch who disappeared for a decade from dog shows.