After celebrating my husband’s birthday Monday, I teased him that our oldest dog, Jinx, an 11-year-old elkhound, is the about same age as him in ‘human years.’ We joked about it because we call her “the ol’ bitch” because she has that grizzled look of a wise old dog. This look – white hairs nearly covering her once black muzzle – afflicts many species. My husband joked back, “We are both grizzled.” 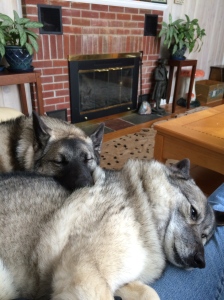 Dog Age in Human Years
In my previous career as the American Kennel Club’s communications director and in-house dog expert, I’d routinely answer questions from the media such as, “Where did the one dog year equals seven human years in calculating a dog’s ‘human age’ come from?” Press inquiries usually came after the death of really old dogs, like a 21-year-old dachshund from Long Island or an allegedly 29-year-old mixed breed from England. Over the years, I’ve answered this seven-to-one conversion question for Esquire’s Answer Fella column, the Wall Street Journal’s ‘The Numbers Guy’ Carl Bialik, and even Slate’s Christopher Beam.

The origins of this conversion as unknown. Most journalists tend to point to the first mention of a human to dog year equivalent in 1268, based on an inscription on the floor of Westminster Abbey in London. Human and canine ages were used in calculating how old one would be around Judgment Day. Ancient scrawl stated that a dog’s average life span was nine years and that humans lived to be 81 years. Another notable comparison example is from Georges Buffon, the 18th century French naturalist, who declared that dogs live about 10 to 12 years while humans live about 90 to 100 years.

Using a rough mathematical formula a nine to one rule was born from these early notations. Then, according to William Fortney, a Kansas State University veterinarian, as quoted in the WSJ piece, human life expectancy was pegged at 70 years (thank you life insurance expectancy tables) and dogs at 10 years and thus the seven-to-one rule was forged into our dog-loving psyche. I tend to believe Fortney’s explanation for the origin of this rule, “My guess is it was a marketing ploy…a way to educate the public on how fast a dog ages compared to a human, predominantly from a health standpoint. It was a way to encourage owners to bring in their pets once a year.” Or you could believe Esquire’s Answer Fella who reported my quote on the rule this way, ..the origin of the seven-year rubic is — like Keith Olbermann’s colon — “shrouded in mystery.”

The Dog Age Formula
But more than half a century ago, science, researchers, and canine studies started to debunk the seven-to-one rule as not a “one-size fits all” for determining you dog’s age in human years. In fact, they learned that the formula varies based on the dog’s advancing age and the dog’s weight as an adult. So unfortunately, like most well-executed marketing campaigns, the seven-to-one rule lives on in popular culture and now must be continually debunked. But if you want to accurately calculate which dog in your household is closest in age to your husband then follow these tried and true guidelines that have been around for the last decade.

The first year of a dog’s life is very similar across all the size categories. Most calculating charts have four sizes based on the adult weight of your dog: Small (under 21 pounds); Medium (21-50 pounds); Large (50-90 pounds); and Giant (90 plus pounds). The first two years of a dog’s life show tremendous growth and aging.

But as dogs age, another mystery enters the formula. The larger the dog the quicker it ages (in human equivalents), so by the time a giant dog is 8-years-old, its human equivalent would be 64-years-old. Compare that to the 8-year-old small dog, who would be only 48-years-old, a difference of 16 years aging between the two! Curious to find our about your dog’s human age? Here’s a complete chart for equivalent age in human years.