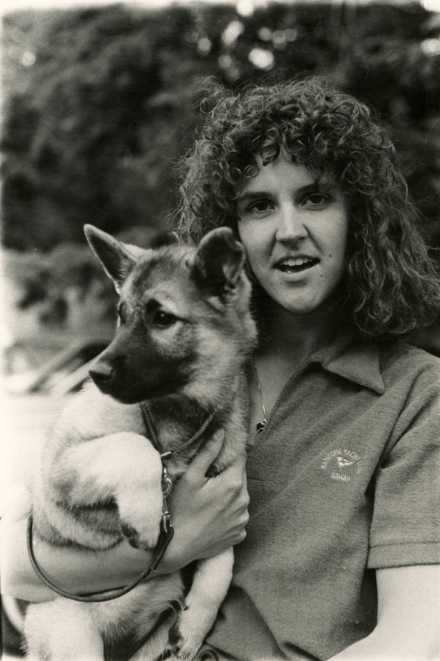 I’d only been a reporter for barely four months when I called my editor, Curtiss Clark, to tell him I wasn’t going to be at The Bee that morning — March 29, 1986 — because my Norwegian Elkhound bitch Mumbles was going to whelp her (and my) first litter of puppies. The day fell on Good Friday, and secretly I was happy that I missed having to trundle down to the Smoke Shop for my weekly job of asking the Bee Lines questions.

But the canine birthing event did provide fodder for a personal column I wrote a week later. I wrote about the birth of one particular puppy, Roxanne (yes, she was named after the Police song, and yes we sang her name to her in that “Rooooxanne” way only Sting can do). When born her little 8 ounce body was not breathing. I quickly learned how to clean fluid from newborn nostrils and gently shake the puppy to dislodge any other fluids from where they shouldn’t be. Then I ever so gently blew life into her little lungs, and with a twitch, a gasp and squirm, the tiny black form came to life in the palm of my hand. It really was the miracle of birth, Norwegian Elkhound style. 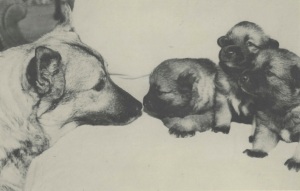 Mumbles checks out her pups. Roxanne standing tall in the middle.

Roxanne was the only female in a litter of three and so I had no choice but to keep her as she would become the foundation bitch of the Elvemel Elkhounds line. So proud was I of this little puppy that I brought her everywhere. I even have a photo of her at about 4 or 5 months old in front of the Newtown Bee. The only thing more frightening about raising my first homebred show dog, was my big curly permed 1980s hair in that photo. As a puppy I would bring her to The Bee to socialize and play with Bart, Sherri’s Baggett’s Golden Retriever puppy. They were only a few weeks apart in age.

Roxanne visits The Bee in 1986

Eventually Roxanne became a champion and shortly thereafter went to the Westminster  Kennel Club dog show to win Best of Opposite Sex to Best of Breed. I only showed her three more times after she finished, including the Westminster win.

After I bred her the first time, I invented a tagline for her ads, “Her specialty was always in the whelping box.” I thought it was a cute play on words. She had 33 puppies in five litters, and produced seven champions along the way, three in one litter of five.

Buried deep in the Elvemel archives I unearthed an old dot-matrix print-out of her show record which documented 42 shows over two years. I did eventually take her out to a national specialty in 1996 and 2000 for the veterans sweepstakes. At the latter, a friend made her a headpiece of sequins and beads which resembled a Viking princess helmet with long glittery braids. Did you know that the Norwegian Eklhound is known as the Dog of the Vikings. His skeletal remains have been found near Viking graves around Scandinavia dating back 5,000 years. That was until, DNA proved the breed was much younger than that – oops! We like to think those bones belonged to related ancestors.

Beyond showing and whelping, Roxanne has provided me some lighter moments. There was the time she found her first skunk, literally moments before my grandmother would be visiting the house in Newtown for the first time. Thinking I could get to her later with a bath, I threw her downstairs in the basement only to have that skunk smell wafting up into the living room as grandma walked through the front door.

Once she got loose from my home in Southbury and made her way to a local dairy farm, only to come home covered in green “cow pie” stuff. This antic was followed by her chasing Burt around the yard after he found a dead, dehydrated, flattened squirrel. Squirrel jerky anyone?

I still have the fleece jacket I left on the chair one day after a dog show. When I came back into the room, she had eaten a hole in the pocket where the liver was. I never mended the pocket. Whenever I wear that jacket and put my left hand in the pocket, my fingers always find that hole, and Roxanne’s antics are revisited.

She was the consummate beggar, especially at the dinner table. Her ability to talk to us in a low moan, “rahr, rahr, rahr” is still repeated by my husband Ray and I when we eat dinner. We make fun of Jinx, six generations down from Roxanne, who tries her vocal skills in the same manner.

Roxanne a few days before she passed away in 2000

Roxanne lived well into her 14th year. Later in life we called her “Slab” because in her old age she began to resemble a slab of beef. She started a love affair for me of breeding dogs and following generations of happy pets placed in loving homes. Today, on this 30th anniversary of Roxanne’s birth, Jinx — the last bitch in the line of direct descendants — took a walk with me as we visited Roxanne’s final resting place in the back yard. The daffodils I planted 16 years ago on her grave had just started to bloom.