“At virtually any daylight hour on almost any road in Redding, children in hard hats can be seen riding their ponies or horses to and from practice fields, pony club meetings or any of the many other horse gatherings in the town.”

This was the scene in neighboring Redding according to Norwalk’s The Hour newspaper dated Aug. 10, 1976.  The reporter was painting a picture of the equestrian community as preparations were being made for the 17th Annual Redding Horse Show which was considered to be “one of the most sought-after local shows in Connecticut.”

Located on Cross Highway at the intersection of Route 58, the large pasture opposite Christ Episcopal Church dubbed Karraker’s Field, was used only once a year for the horse show. In fact, “…both the outside course and the ring are in such perfect condition that both horse and rider are able to perform at the peak of their abilities.”

The Hour continued, “The outside course is long and rambling, offering a true test of a hunter and with the added benefit of No Dust and good footing because of its infrequent use.” The show boasted a trophy and six ribbons in each class.

This stop on the local horse show circuit was an annual fundraiser for the Boys Club of Redding, whose club house – built in the 1950s and destroyed by fire in 1996 – was down the road. The show even made The New York Times Horse Show Calendar each year. On August, 26, 1979, it read, “Today – Redding, Karraker’s Field, Redding, Conn. Regular, local, special and children’s working hunters; pleasure horses, equitation. 8:30 am.”

Riding the Outside Course

At the 1978 Redding Horse Show, I rode that outside course aboard Speculation my bay Thoroughbred fox hunting mount. This course, like most others at local shows at the time was held in a big field to simulate hunt country. But unlike the others which were up and down hills, around tighter corners and held daunting, solid stone walls in three heights, this one was flat, with well cushioned grass and lovely fences spread so far apart, each one was a long approach. 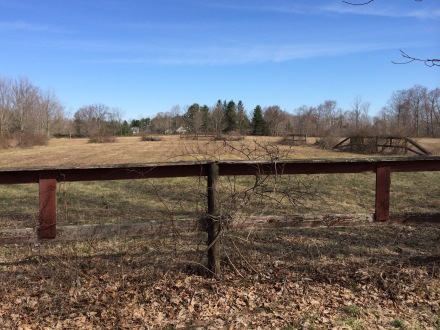 Looking past the old riding ring towards the outside course

We were entered in one of the local hunter classes, maybe 20 or so entries. We neither practiced nor made an entrance circle. Simply, we picked up a gallop and off we went across Karraker’s Field in search of the first fence. In the middle of this pastural oasis was the judge’s stand, a wooden platform with a single folding chair from which to officiate.

There the judge watched as Spec and I galloped freely from obstacle to obstacle. No counting strides between coops and split rail fences. As we turned towards home, the red barn and riding ring cam back into sight. We had a blast! We won a red second-place ribbon.

Later that day we entered an equitation jumping class in the ring boasting perfect conditions. We loved the tight turns in that little ring. We had a blast! We won a red second-place ribbon. Finally, we entered an equitation flat class. Spec, a high-energy horse, was settled enough to for me to put in a red second-place ribbon performance.  My girlfriend from New York City had come to visit and proudly displayed my three red ribbons off the back pockets of her blue jeans. She was my surrogate trainer for the day.  Red ribbons waving in unison with her sashay.

Two years ago I stopped at Karraker’s Field, a mere 36 years after my red-ribbon day for a look around. In the ensuing decades, the horse show had ended and the land donated by the Karraker family to the Redding Land Trust as open space. It was a peaceful place, yet the ghosts of horse shows still lingered. In the middle of the outside course, a collapsed judge’s platform lay hidden beneath a mound of prickers.

The grass from the long and rambling outside course had made its way into the ring, only a post and hinge remained of the in gate.

Only two corners of rotting fencing reminded me of the riding ring with the perfect conditions. The reminders of the Redding Horse Show seemed doomed to disappear into the dust.

Then, last Fall the old red barn where entries were taken and numbers handed out for the horse show had a face lift thanks to a local boy scout. According to the Redding Land Trust site: “There is a corner in Redding Ridge, at the intersection of Cross Highway and Route 58, that has long been celebrated as Karraker’s Field, from the days when young riders assembled there for local horse shows to the open fields now preserved by the Karraker family’s gift to the Redding Land Trust. When Cooper LeBlanc, a member of Redding’s Boy Scout’s Troop 15, was searching for a needed community project to tackle in order to earn Scouting’s top badge of merit – Eagle Scout – he spotted a rotting red barn covered in weeds in the historic field.”

Karraker’s Field Barn ~ recently fixed up by the Boy Scouts

When I drove down Route 58 on Monday, the barn with it’s bright red exterior called out to me, instantly igniting memories of my red ribbon horse show. I could even feel the wind on my cheeks as we galloped the outside course. Thank you Cooper LeBlanc and Troop 15 for preserving reminders of the Redding Horse Show.